About four years ago I decided to install my own Sky+. Back then the cost of Sky+ installation was quite high, so I went up the ladder and added a new LNB and ran the extra cable needed myself.

Last week my mom moved into her new home. The previous owners had cable TV but my mom didn’t want to pay the monthly charge. She just wanted, as a lot of people do, free TV. After several failed attempts at getting a picture via terrestrial transmitters we went outside and had a look at the aerial on the roof. I quickly found that the rusty aerial, which was about 8 foot high, had a break in the coax cable. We tried getting a picture using an indoor aerial but, with the advent of digital TV and the distance to the transmitter, we got nothing at all. An aerial guy came and quoted about £120 for a new aerial plus a new run of coax. Nightmare.

It’s probably not known to many, but Sky do “Freesat”, meaning you can watch all the “free to air” channels through your existing or any other Sky box you have knocking around. Mom had an old Sky+ box that she was about to sell, so we decided to try the Freesat option to save a bit of cash. More info on this can be found on Freesatfromsky.co.uk. These channels are also listed in the standard paid-for Sky TV packages and you’ll find that many people assume that the Sky subscription pays for them, when in fact they’re free. Sky do make a big noise about the fact that you’ll get “more free channels through Freesat from Sky than Freesat from BBC / ITV”. Here’s their comparison chart. Yes, it’s true – you do get more channels from Sky than BBC / ITV or Freeview through your aerial … but a lot of the extra ones are bilge. 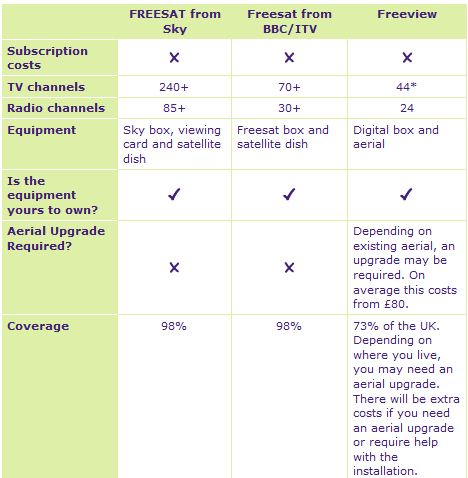 Amongst the 240 TV channels you do get BBC One, Two, ITV1, Channel 4, Five, BBC Four, BBC Three, ITV2, ITV3, ITV4, Fiver, E4, CBS and quite a few music / news channels too. You do need to pay £20 for a card, but this is one-off and just to ensure that people outside the UK don’t get the BBC etc (even though they do). Old Sky cards might work for a bit also. After a bit of looking I found some Sky TV satellite dishes on eBay. I found this item from SatelliteBargains. It included the dish (which you construct yourself), mounting brackets, all the bolts and screws, a quad-LNB (for two Sky+ boxes or four running without the PVR functionality), 20 metres of twin coax cable (so no need for two seperate runs of coax for Sky+ / PVR functionality), cable clips, plus 4 “F” connectors for wiring it up at either end. I figured it’d be easy enough to install myself and did a bit of Googling to find out what I should do. 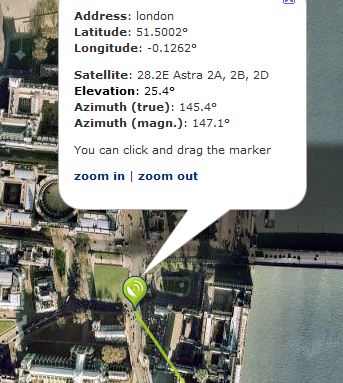 DishPointer was my first port of call. You put in your address and the satellite you want to point to (in this case, the Astra satellites at 28.2E) and it’ll tell you which way the dish should go and the tilt settings etc.

I must say a big “thanks” to the guys at SatelliteBargains. I ordered the item in the afternoon and it arrived the very next day. The whole thing cost me £31.98, so we’ve instantly saved ourselves about £90 from the TV aerial install. I wanted to get a “satellite finder” too. This is just a small meter that tells you when you’ve got the dish pointed correctly. I arranged to borrow one from a friend and also found this augmented reality app for Android which is available in the Market. Here it is in action..

Unfortunately, on the day, I had a problem. My mate lost his satellite finder, so I didn’t have that. My solution was a bit “Heath Robinson” but it worked. Although I had the great info from DishPointer I was lucky enough to have spot the neighbours dishes and where they were located. I checked for trees and decided to stick the dish on the corner of the house. The dish that SatelliteBargains had sent came with full instructions so it was just a matter of sticking the “arm” into the dish and screwing it on. Next came the mounting bracket, which is seperate so you don’t have to hold the dish all the while. Again, everything came supplied so I used the bricks and a spirit level to ensure that the bracket was level. Once this was on I added the dish and roughly pointed it in the right direction. We’re only about 30 minutes in at this point, and that includes cups of tea. I still didn’t have any way of judging whether I’d got a signal, but I had a plan. In the garage was some coax that we found in the house. It’s normal TV aerial coax and was pretty short so I went up the ladder, slid the LNB on and stuck the coax in with the supplied “F” connector (this is a circular screw-on connector which goes into the LNB and your Sky box at the other end).

At this point I went in the house and got the smaller LCD TV. This got balanced rather precariously on the wheelie-bins as you can see. The Sky+ box went next to it and then I screwed the other end of the coax into the “Dish Input” on the back of the box. Next, using the Sky remote, I went into the “Services”, then “4” for “System Setup” and “6” for “Signal Test”. My own Sky box at home gets around 75% strength and quality, but I was looking for anything at all really. After getting back up the ladder I slowly moved the dish to the left and the right, then up and down in a methodical fashion. Left, up-down, left a bit more, up-down. Amazingly I got almost a full signal after about 10 seconds of trying. It took another few seconds to find out where the “hit” was but, after finding it again I tightened the bolts and managed to get a 75-80% strength / quality reading. Thanks to the old Sky card still being present we got all the TV channels in perfect quality. The next step was just to run the cabling down to the “big” TV in the lounge. We had a 20 metre run of cable included, so there was plenty. After clipping it to the wall (with the included clips) I used the “F” connectors at each end, slid the LNB “shield” down (this protects the connectors from the elements) and took the Sky box inside. Mom now has a perfect picture, and all for £31.98.

I should add that a “Freesat from Sky” card is required. We’re currently using an old Sky card that mom has only just cancelled. The Freesat card from Sky is currently £20 but it is “one off”, so the up-front total is £51.98 WITHOUT the cost of the digibox. If you need a digibox they’re fairly cheap from eBay and there’s also “kits” in places like B&Q and Misco that include satellite finder meters. I should also mention that the “PVR” functionality WILL NOT WORK if you’re using an old Sky+ box unless you pay £10 per month for the privilege.

← Those YouTube comments..
How the all-new iPhone got outed →